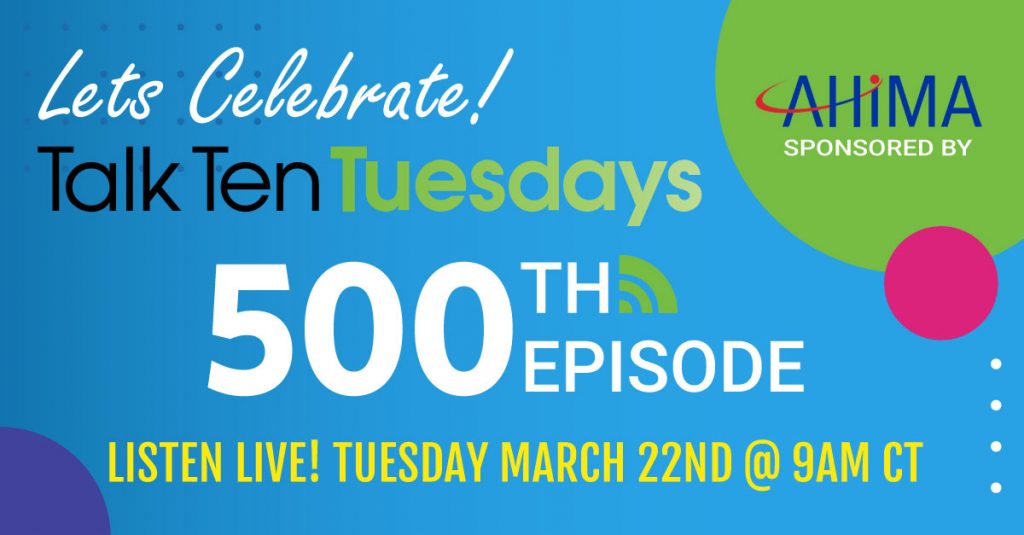 As the 500th episode of the Talk Ten Tuesday approaches, MedLearn Media editor Jason Henninger chatted with the broadcast’s host and creator, Chuck Buck, to look back on where the informative webcast has been and where it’s headed.

Jason Henninger: How did Talk Ten Tuesday come to be?

Chuck Buck: We had already started with RACmonitor in 2008. I got the idea on the flight to a meeting in New

Jersey with a RACmonitor sponsor. While on the plane, I said to myself, we ought to do a live broadcast. I’d

always been in journalism, and in broadcast either as a producer or as a talent.

I wrote the concept on the back of an air sickness bag, and I pitched Monitor Monday. We got it organized and

it started in 2010. But at the same time that I was doing RACmonitor and Monitor Mondays I realized that one

of the biggest issues coming up would be the United States migrating from ICD-9 to ICD-10. It had gone

through a number of fits and starts during the last thirty years. There was a lot of opposition at the time. I

thought, well, it’s going to be controversial, and it would be interesting to see if the United States does adopt

the tenth version of the International Classification of Diseases. So, we started ICD10 Monitor in 2011 and

Henninger: You don’t come from a coding background. What challenges did that present you?

Chuck: The biggest challenge — and I don’t think I’m alone in this — is trying to understand the anatomy

involved. So much of this is body parts, this piece connected to this piece. In fact, coders will often say they

need to have a refresher course on anatomy and physiology. It’s a challenge to understand what these very

discrete codes they are really talking about. I put it in the category of lifelong learning. I can talk about body

parts at a cocktail party now for about five minutes and sound pretty authoritative.

Henninger: When do you think we will move to ICD-11?

Chuck: That’s a subject we talk about frequently on ICD10 Monitor and Talk Ten Tuesday. The best guess I

hear is four or five years from now. ICD-11 has already been adopted in a number of countries. What happens

here is that ICD-11 has to go through a clinical modification. That’s going to take a couple of years. Though

there are some websites up now where you can test it out, but it’s a few years away from being fully

Henninger: Will ICD-11 be very different from 10?

Buck: From what I understand, it’s more comprehensive and there are no printed code books involved. It will

be all online. We have an excellent authority on this very subject, Mary Stanfill, who is now our ICD11

correspondent. She’s an excellent writer and a subject matter expert, and she’s written a few articles for us.

Henninger: Looking back over years, what stands out to you?

and so forth, that got delayed and delayed. That gave us a great ride. We’d always being asked, “Are they going

to adopt it now?” And no, something would always come up and delay it. The AMA at the time was opposed to

it, and doctors were opposed to it. They said it was too complicated and laborious for doctors to use. It was kind

of a roller coaster experience. They’d say everything is all set, then something would happen, and it would get

delayed for another year. It was exciting to follow and ask, is it ever going to happen? And then, it did happen.

It all made for great radio and great stories, because of the suspense and controversy. It was a fantastic

experience as a journalist and as a producer.

Henninger: How has the pandemic affected the show’s content?

Buck: We’ve been reporting on the general mistrust of medicine. COVID-19 is different from swine flu and so

forth because it became highly politicized. Trump was dismissive of it. In Carl Bernstein’s book, Trump said he

wanted to be a cheerleader. He just wanted to bring the country good news, and he figured COVID-19 was bad

news, so he tried to bat it down. So, everything associated with it, vaccines, social distancing, mask wearing,

hand washing, all that became controversial and politicized.

Dr. Remer is a big advocate of vaccination, in fact she volunteers to administer vaccines. So, every time she’s

brought it up, we get these critical comments asking why we’re talking vaccines, saying that they’re

experimental, they aren’t proven, they use fetal tissue…all these rumors feed distrust of the vaccine.

Additionally, when the new administration came in, they focused on health equity, and of course they found

health inequity for minorities. There’s a common distrust of healthcare in minorities, and whose outcomes are

typically worse. There are higher rates of diabetes among African Americans, higher maternal mortality, and

cardiovascular issues. This spills over into what’s referred to as the social determinants of health where income,

living conditions, education and so forth are non-clinical factors now being considered part of the medical

Marry that distrust among minorities, now, to the distrust of vaccines and mask wearing. And a lot of

Americans are also deferring medical attention for fear of the coronavirus. They’d rather delay getting that

cardiogram or whatever diagnostic tests in person.

Henninger: How do you see the broadcast in the future?

Buck: I would really like to see us do a daily broadcast. Healthcare is massive, it’s changing all the time, and

we have enough content and enough interest. There are so many issues that it would be helpful for people to get